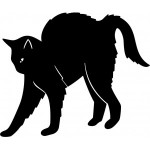 Darkness fell upon the city as sudden and immediate as closing a basement-door would conceal daylight from sight. That was the nature of late autumn. The king of winter slowly reclaims his throne and the triumph of darkness in those gloomy days heralds his arrival.

The cat was not gloomy though. Darkness meant safety and the chance to find food. The strangely behaving big creatures with two legs would return to their buildings of stone and timber and the world outside would return to the realm of opportunities that the cat loved it to be. This was the moment when she finally dared to leave her home behind and roam the night beyond its boarders. The cat loved the city, though she did not understand it as we do. Where we see decline, she would see wealth, where we are drawn to, she sees danger and where we stay away from are the places that she seeks, since every deserted, barren backyard promises a wide-selection of delicacies.

Yet, it was no backyard that her paws were leading her to, but the water which ran through this place of stone and metal. She did not question its presence amid this landscape of man-made features. It was there and that was good. Noise made her halt and hide. Loud laughter drifted by and her excellent hearing made her aware of its origin and the distance between where she was. More often than not, the presence of this noise was accompanied by strange smells that her fine nose would pick up as surely as those of a tasty piece of meat.

She had learned that too much of this smell would make her dizzy, so she quickly moved past the noise, artistically darting through the patches of light she wished to avoid. And there it was, the treacherous liquid that would attract the delicacies as magically as the song of love that had made her meet that black-furred gentleman last night. The odor of them made her cease in her strides.

They were everywhere around the water, feeding on the things left behind by the two-legged giants. Her eyes narrowed as she froze and caught sight of two of them, fighting over a piece of something that did not really smell eatable. She slowly approached the pair, putting her paws on the ground as tenderly as if walking on clouds. A loud noise interrupted her attempts. One of the big machines that would ride on the water appeared out of nowhere. Its terrifying sound interrupting the silence of night. Deciding quickly where to hide, she sped away, watching the delicacies with fury as they did the same. Yet the noise was too hideous to think about them now. The thing was crowded with the two-legged giants who were yelling and cheering as they sped by.

She caught sight of the cloth waving back and forth on the back of the thing. The bright red, mixed with blue and white, thrilled her as much as any bright colour would. She had seen it many times, it obviously was meaningful to the giants. Again she smelled that strange, whatever it was, that would surround them so often.

It was the smell of her home though, so for some reason it made her comfortable and she knew she would be away from her land if she stopped catching the fragrance in the air. When silence fell again, she sat still while her ears twitched back and forth and scanned the surrounding area. She was used to many of the sounds: the way the bells rang on those even-bigger machine monsters that would transport the giants through the city, intermixing with the many voices they would speak.

A cat like her would move about this strange home of hers as naturally and care-free as only one could do that had grown up in this place. So she wandered on, still eager for a successful hunt. It was not that she was hungry in particular. One of the giants had occupied her home and she had come to accept its presence, since it would feed her and not bother her too much. So she tolerated that situation and had come to see the hunt as a welcome chance for some adventure. She sped on through the night, past the bright lights and open squares, past the half-timbered houses and silent alleys, always having an eye for a dark corner or hidden place. Squeezing through fence and gate she moved as freely as a bird in the sky.

Yet, she had to be careful. The giants would not only ride on water or street but also moved about on metal horses and those made her afraid. More than once she had managed to escape those creatures. They were fast and appeared around every corner. A cat of this city had to learn to avoid them. She was a master at that and crossed the open street while darting between two of the metal horses in a move so graceful and skilled that those giants did not even notice her as they looked at each other and produced those guttural sounds they used to communicate. She had arrived at her destination. It was an open area with two significant landmarks on either side. One was a big white something that drew many of the giants. It was hard for the cat to take her eyes of it. It was a blazing beacon of bright, white color and to the eyes of the cat it held some fascinating secret that only she was able to understand. On the other side of this great open place was a big building made of stone that seemed more intricate in its design than all the others.

What lay beyond its walls was a mystery to the cat and nothing she cared about. But when the moon was just behind the little golden ship, that was attached to its roof, her eyes were drawn to it as a needle would be drawn to a magnet. The display of sparkling light created such liveliness and splendour that even the mysterious white beacon seemed profane compared to it. All that wonder and grandeur did not seem to bother the giants. The cat looked at them from their hiding place as the pandemonium and commotion they created seemed never to cease and float along aimlessly. She was not afraid of them, only bewildered and baffled at their strange behaviour.

It was so unusual and puzzling that she preferred to stay away from them nonetheless. Who could tell what those huge creatures were up to? She had to cross the open area though. She had the desire to return home and catch a delicacy on the way and that meant nothing else than exposing herself to to danger and having to do without the precious safety of a proper hiding-place. She slowly leaned forward and prepared herself. A huge blue machine-monster arrived from one end of the square.

The cat was aware that this creature would catch the attention of the giants for a moment and not only that. It would also grant a precious little bit of concealment. As the machine monster arrived she started to run as fast as she could. She caught sight of giants pointing at her and shouting incomprehensible things while she navigated through them, making sure not to slow down. She dashed elegantly across stone benches and between bins made of metal, never losing sight of what lay ahead. As she reached the sanctuary of the other side, she jumped on a wall as quickly as she could. Only when she was sure that she would be out of reach of the giants she slowly turned around. Her heart was beating as fast as the flashing lights of the city when she slowly settled down to relish on the successful outcome of her dangerous journey.

She remained where she was for a short while, sitting on top of her wall as if it was her very personal throne. Who would dare to doubt that? It was her city and she was the queen of it. After some time had passed she jumped from the wall and continued her journey to a place where the giants would eat. It was close to her home, a swimming building in the water that had strange signs and symbols painted on it. The roof looked different than those of other places in this city. It consisted of several layers built on top of one another and the edges of those roofs were slightly tilted. The giants obviously had many sources of food, since much of what they consumed was left behind and stored outside. She could smell the odor of meat, mixed together with non-eatable things as she approached the back of the large building. She caught sight of several tasty, furry little things that crawled in and out of plastic bags full of food.

She was tempted to go through them herself, but a queen does not bother with what others leave behind. So she abandoned that thought and slowly lowered herself down. She had to be careful not to be noticed by any of them, since that would warn them all. She focused her attention on a particularly fat one, that looked as if it had spent an entire week crawling through those bags and stuffing itself while doing so. She waited for it to return a last time from inside the bags. When it moved into sight, dragging a piece of cheese out of the bag, the cat attacked. She moved like lightning, her sharp senses guiding her. She turned from queen to predator as her teeth bit hard into the surprised delicacy. She killed it with delight, enjoying the essence of her true nature as it came to the surface. The other delicacies dispersed in panic and terror as one of them had bitten the dust.

Suddenly everything was silent. She felt exhilarated and fullfilled as she looked down on the unmoving little thing that was lying at her feet. She considered bringing it to the giant that occupied her home. It gave a lot of food to her and generally behaved well, but she had tried before. The outcome had been a screaming giant that would act even more irritatingly than usual. She knew better by now. When she had finished her meal, not even eating half the delicacy, she started to trot back home. It had been a wonderful night in her city, yet again.

The cooling wind that ruffled through her fur carried a salty smell. The great big water was close to here and she knew that. The sounds of the city had died down now, everything was as quiet as a graveyard when she fully claimed her realm to herself. All the metal monsters had disappeared so she walked proudly in the middle of the street. Her tail stood upright and pointed towards the sky as she licked blood of her mouth. When she arrived at her home she did not bother that the entrance was closed. Gracefully jumping from wall to wall, ignoring the limitations the giants had set for themselves, she made for the window of her room. The giants were asleep, her sharp ears catching the appalling sound of their snoring. She sat on the windowsill and looked down on a colorful giant-made construction. It was red and white. She had no idea what it was for but she loved the colours. The construction was very low. But not its height, but the strange arrangement of shapes that formed into “I amsterdam” was something that made her feel comfortable in a strange way. She jumped to one of the soft thrones the giants had provided for her and as she closed her eyes, she felt glad to live in this strange place…..